While looking at Stratfor's map of social unrest in the middle east today, it struck me that ALL of the Arab portions (Iraq and Palestine-Israel are US clients) of the former Ottoman Empire are experiencing unrest: 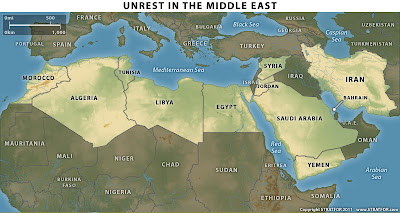 Former territories of the Ottoman Empire 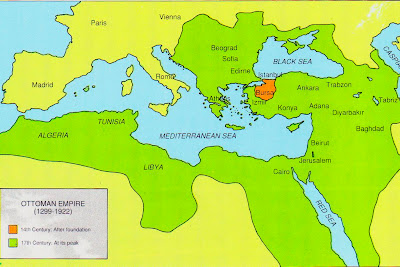 The Arab portion of the Ottoman Empire was split into nation states by the Allies after World War One. Puppet monarchs friendly to western interests were installed, some of which are still around.

Lets look at the similarities between the Ottoman Empire and the nation states of today:

The Ottoman Empire was divided into a number of administrative units called Eyalets, which are similar to the nation states that now exist, each Eyalet was ruled by a governor appointed by the sultan. These governors were notoriously corrupt as was the rest of the government sector. Bribes were required for everything. Government officials would spend their career building up vast ill-gotten fortunes, often used to 'buy' their next promotion.

So what about social unrest in the Ottoman Empire? From Britannica:

Social Unrest
These conditions were exacerbated by large population growth during the 16th and 17th centuries, part of the general population rise that occurred in much of Europe at this time. The amount of subsistence available not only failed to expand to meet the needs of the rising population but in fact fell as the result of the anarchic political and economic conditions. Social distress increased and disorder resulted.

We have exactly the same conditions in the contemporary Arab states - massive population growth, very high unemployment (especially amongst  the young), stagnating economies and very corrupt governments with leaders amassing vast fortunes from corruption. The recently deposed president of Egypt - Hosni Mubarak - is estimated to be worth between 40 and 70 billion US dollars.

at 15:52
Email ThisBlogThis!Share to TwitterShare to FacebookShare to Pinterest