In light of the headlines about a potential China vs USA space race following the successful return of the China's Shenzhou 9 spacecraft I thought I'd add my 2 cents. Nothing is healthier than a bit of competition. I find it infuriating how slow progress in space exploration has been. This xkcd is great, NASA has been up to nothing for far too long. 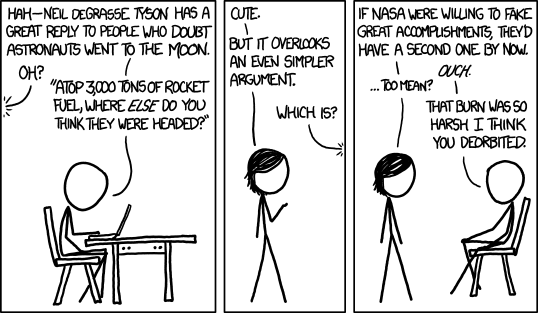 The United States space programme reminds me of the Chinese age of discovery. See the Chinese actually kicked off the age of discovery before the Portugese in the early 15th century, and then did nothing for the next 500 years.
The Chinese Age of Discovery lasted for 28 years (1405-1433), and consisted of seven voyages led by the Muslim eunuch named Zheng He. Chinese ships regularly ventured to India and occasionally to East Africa. But ironically the first Chinese ship to round the Cape of Good Hope and arrive in Europe didn't show up until 1848. 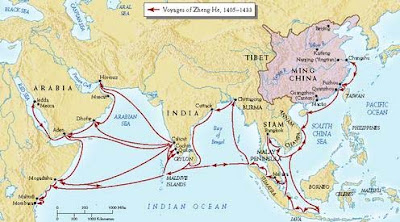 Why did the Chinese stop exploring? Jared Diamond does a good job of explaining all this stuff in Guns Germs and Steel. China and India were much richer than Europe, the west needed trade with the east far more than the other way round. Also, The Ming and later Qing dynasties preferred internal stability over progress, which lead to a very traditional inward looking culture. Europe on the other hand, being politically fragmented lead to a 'survival of the fittest' among states, political entities that adapted new ways and technology wiped out the ones that didn't. America today is in a similar position to the Qing dynasty was, without political rivals, America is more interested in maintaining stability than driving innovation. The fact that no one has actively competed in space since the fall of the Soviet Union has only compounded the stagnation.

I think Vernor Vinge could be on the money with this quote:


Vernor Vinge: I have a small theory that this is one reason why space travel development has gone slowly, in that it gives military advantage in an unclear way, and the top players were not interested in poking that particular gorilla, so they just settled for very much slower progress.


China stagnated until the Qing dynasty was so rudely awoken from its slumber by the British who wanted to plunder its resources and sell a lot of opium (Empires cost a lot of money, the British used slave trading and drug dealing to build theirs). Lets hope the Chinese progress in space exploration wakes the west up from its slumber... but much like the Chinese then, there is a lot of wrong thinking that needs to be addressed. Lets looks at the the Heritage foundation's recommendations for Responding to China’s Manned Space Challenge:


Incorporate the space program into strategic communications and public diplomacy. For the PRC, space is seen not only as an arena for industrial policy but as a diplomatic and public relations tool. By contrast, NASA has a level of name recognition and positive association known the world over, but it underutilizes it. NASA’s products are a regular refutation of the claim of American decline and should be used as such. Although the 1970s-era Voyager spacecraft departed the solar system (marking the farthest distance any man-made object has ever traveled) the same week as the Shenzhou-IX mission, it received little fanfare.

Right... so the top recommendation is increase PR for something America did 40 years ago (Voyager). And when I say America, I really mean the German rocket scientists who did all the real work in the early American space program. Lets see if they have any other pearls of wisdom:


Increase reliance on the business sector. A few weeks prior to the Shenzhou mission, a private SpaceX cargo spacecraft resupplied the International Space Station (ISS). Basic research in space science should be a major focus of NASA and other U.S. aerospace agencies. But the commercial sector, ever intent on reducing costs, has a different incentive structure for certain missions than the government does. Space exploration arguably requires the government. The business of space exploitation—whether resupplying the ISS or promoting space tourism—does not.

This is a decent one but I'd go further, how about massively cutting NASA's budget to fund more private enterprise? Anyway, next recommendation:


Be cautious in engaging China in space. There is always an American audience interested in space cooperation, especially relating to manned space, but the Chinese position emphasizing indigenous development suggests that Beijing will pursue technological “cooperation” that favors itself in any joint space ventures, such as demanding establishment of R&D facilities in China and preferential transfers of technology. As important, Chinese interest in legal warfare should serve as a caution toward creating new international regimes or codes of conduct where Beijing may well be able to constrain American efforts at preparing for potential space conflicts. Cooperation needs to benefit both sides—not just Chinese state-owned champions—and should not provide China with ready ammunition for future legal warfare measures.

Yes you read it right, lets get ahead of the Chinese by not telling them anything, that way it will take them longer to catch up. From a commercial rivalry perspective I can see how this makes sense. It's like getting IP lawyers to extend the patent on something your company owns that was discovered 40 years ago.
at 21:24
Email ThisBlogThis!Share to TwitterShare to FacebookShare to Pinterest