Google glasses and our future as Borg

This picture showed up on my Google+ feed the other day. I like it but It doesn't go far enough.  There's no Borg.

Allow me to present prediction number 6!

On the left we have Star Trek's Captain Picard who's been assimilated by the Borg hive mind. On the right we have the beautiful Diane von Fristenberg show casing Google glasses.


Combine The Matrix and The Borg and you have our future. We are all going to have an Internet connection plugged directly into our brains. Laptops, phones, and google glasses are stepping stones but they are still rather inefficient mechanisms for information transfer. Google glasses are simply the next baby step.

Think about it: you read text on a screen, your eyes convert the image to electrical signals and send it to your brain for processing. Same with your ears, and your fingers do the reverse. Why not just remove your senses from the equation and send the electrical signals directly to and from the brain? The Borge do, the matrix does and we will soon.

Don't worry it wont be that bad. The thing the Borg did wrong was its PR campaign. Going around threatening people and using violence to force people into the hive isn't the way you win hearts and minds. You get models and celebrities to wear the stuff and everyone else will follow... this is what Google is getting right!

If on first contact the Borg had rocked up to earth with a dolled up seven of nine telling everyone how great the collective is, earth wouldn't have been so anti-assimilation. 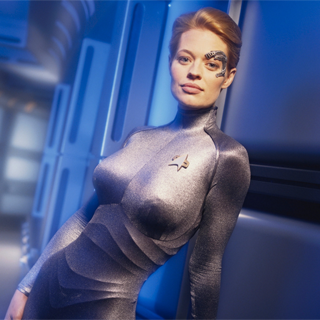 at 19:15
Email ThisBlogThis!Share to TwitterShare to FacebookShare to Pinterest