Bernie Sanders - No Empire at the expense of the people

I can see strong parallels between the American and Roman elites who benefit from an international system which favours their military and economic hegemony at the expense of the middle classes which got them their initial military victories.

In the case of Rome, Empire lead to the decline of the economic livelihood of small tenant farmers of the Italian peninsular as the Roman republic transformed into the slave based economy of the Roman empire, following victories against the Carthaginians, Gauls and Greeks. In the case of the United States, military victories against the Germans, Japanese and Russians have lead to a financial system dominated by the U.S. dollar where neoliberal economic policies favour free trade, deregulation and labour outsourcing to the detriment of the American working and middle classes.

As both Bernie and Trump are pointing out, the outsourcing of manufacturing and services jobs to low cost countries like China and India provides a short term economic gain for fortune 500s but creates a long term structural weakness in the American domestic economy. This the the true price of military victory: the hollowing out of the victor nations middle and working classes, which lead to the eventual decline of both the Roman empire.

I haven't done a great deal of "stitching" on this one, but I want you to look at some excerpts around current US economic policy and compare it to the economic policy of the Roman empire, once it moved from a free hold peasant farmer based economy to a slave based economy.


Bernie Sanders on the Late show with Stephen Colbert


Sanders and his host had a lengthy discussion on problems facing the U.S., calling it a "moral outrage that the top one-tenth of 1% today owns almost as much wealth as the bottom 90%, and that 58% of all new income is going to the top 1%." He explained that, while he wanted an entrepreneurial society, Sanders didn't believe there could be one while so much economic power was in the hands of the ultra-wealthy.

Bernie Sanders is presenting himself as the champion of the middle class who is not in the pocket of the wall street financial elite, like "establishment" candidates, America's Neo-aristocracy: Hillary Clinton and Jeb Bush

To what extent were economic factors to blame for the deterioration of the Roman Empire in the Third Century A.D?


After the second Punic war many new economic transformations began. During this time, many of the best agricultural lands in Italy were devastated. Many wealthy opportunists had profited during the war and were no longer inclined to finance small farmers. There were new possibilities for business of a less insecure and therefore more tempting nature. Contact with Carthage had opened the eyes of many greedy Romans to the profitability of scientifically managed large-scale agriculture. This combined with a new abundance of cheap land and slaves initiated two new economic developments. Men with money started to buy these huge areas of land, formed large estates, and set about working them for profit with the new cheap and plentiful supply of slave labour. Connected to this was the increasing tendency of small cultivating owners to choose not to resume their interrupted occupation or to even be driven to abandon their holdings. The only hope of halting this economic development lay in the political sphere but power was steadily passing into the hands of the very men who profited from this new system.

The growing number of provincial taxes brought into being a large class of investors whose speculations tended to generate substantial returns. This ever-expanding and highly important class known as the Knights (equites) had little care for the rapidly disappearing peasantry. Initially their main activity was to squeeze concessions from the Senate thereby meaning that for a time popular leaders were able to engage their support against the ruling nobility. However, selfish interests gradually became the guiding force and they joined with the senatorial nobles to form a party of property. In light of this it is hardly surprising that efforts to restore free peasants to Italian land were a failure. The main area of commerce in the latter days of the Republic was the slave trade and therefore Roman financiers were deeply interested in this. Any attempts to reform the system were normally met with hostility.


The system fell into such disarray that that by 284 A.D, the condition of the small tenant farmer had generally become one of semi-servile dependence. His legal freedom became very limited and his economic position increasingly depended on the preservation of a holding often blighted by encroachments. If he left his land he would probably starve but if he stayed then he effectively be a serf. Legal changes later on made it the case that to be a colonus was to be attached to a specific plot of ground with which he himself was transferable. This change, however rational it may have been under the circumstances really only confirmed what a mess Rome had made of its economy and all this did was to effectively consummate agricultural stagnation by law.


This very same economic conundrum is affecting the United States: there is the same misalignment between the interests of the financial-military industrial complex and the middle class that there was in the Roman Empire.

Here is an excerpt from a ZeroHedge article on the economic policy decisions the United States has made over the last half century:

The Unlikely Rise Of Donald Trump And Bernie Sanders


Although the economy successfully created a broad path to the middle class, it was inefficient. Persistent inflation became a serious issue. To address inflation, President Carter implemented a series of supply side measures designed to improve the efficiency of the economy. These included the deregulation of financial services and transportation. He also appointed Paul Volcker as Federal Reserve Chairman; he implemented a “hard money” monetary policy. President Reagan took Carter’s reforms and expanded them further, leading to additional deregulation and globalization.
The good news was that the policies brought inflation under control. The problem was the broad path to the middle class in the developed world was dramatically narrowed. To now survive in the labor force, workers needed to rapidly adapt to new technologies and methods and compete on a global scale. Those who could were greatly rewarded; those who could not were left behind. 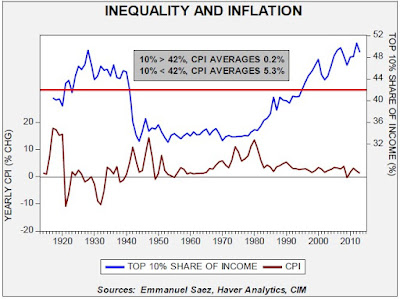 This chart shows the share of total income captured by the top 10% of income earners and inflation as measured by CPI. As the data shows, when this share is above 42%, inflation tends to be non-existent. When the top 10% share is below 42%, the CPI average is 5.3%. Inequality isn’t necessarily the cause of low inflation, but deregulation and globalization, which are effective against inflation, tend to cause increasing income inequality.
This led to a conflict between domestic and foreign policy. Containing inflation was a key domestic goal, but widening income differentials weakened the average household’s ability to consume, which undermined the reserve currency role of the superpower. The way the U.S. resolved this conundrum was through debt.
Using debt to address the requirements of providing the reserve currency was never going to be a permanent solution to the problem of running a domestic economy and meeting the requirements of global hegemony. However, as long as credit was widely available, the political situation was manageable. The financial crisis of 2008 has made it clear that the debt option is no longer viable. And, to a great extent, the election of 2016 should be about answering these two questions:

at 22:30
Email ThisBlogThis!Share to TwitterShare to FacebookShare to Pinterest