So according to these citigroup memos there is a Managerial Technocratic Aristocracy in the Anglosphere paying itself massive salaries and making zillions from start-ups. The anglosphere countries function as Plutonomies, while other western nations are more egalitarian.

Characterizing the U.S. Plutonomy: Based on the Consumer Finance Survey, the Top 1% Accounted For 20% of Income, 40% of Financial Wealth and 33% of Net Worth in the U.S. (More Than the Net Worth of the Bottom 95% Households Put Together) in 2001 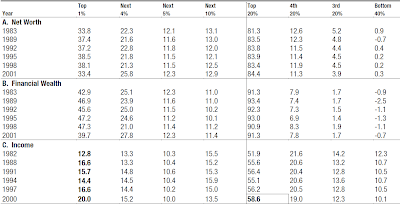 In addition the nature of the economic elite has changed from more of a feudal model of deriving income from owning land and capital to one of high salaried executives and billionaire entrepreneurs:

The Metamorphosis of the Highest 1% of Income Earners in the U.S.: from Rentier Rich to a Managerial Technocratic Aristocracy 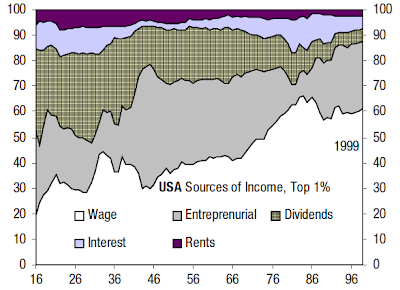 Now fundamentally as a species we are egalitarian by nature, is what is happening unnatural or even immoral or is it just the pareto principle playing out along with suitable financial incentives for business leaders and technological innovators? I don't know myself, however I do think most individuals don't need millions / billions of dollars as motivation to be productive.


In saying that,having a lot of wealth in the hands of a few may seem unfair, but I would argue, only if it adversely affects the human condition of the 99%. Keep in mind 99% of tennis grand slams are won by 1% of tennis players, 99% of blog entries are produced by 1% of bloggers (I'm making the numbers up), etc, etc. My point is it is natural to have an elite dominating any given domain due to specialisation.

This isn't something trivial as tennis however, our wealth has a large impact on our quality of life. We in the west aren't that bad off, sure you could have more toys but I would argue as long as we retain open access to the internet & information goods then the quality of human experience will remain comparable across the board. As information goods/services consumption continues to grow as a proportion of GDP then as long as we all have open access to a large chunk of them, inequality wont be as bad as the numbers look. Yes their will be material good inequality but not huge inequalities in terms of the human experience / quality of life which will shift more and more to the consumption of information, bypassing tangible goods. Given the marginal cost of propagating information goods/services for consumption is near zero, in the long run this material imbalance will cease to matter (as much), provided patents / intellectual property law is reformed.

The real worry then is if these Anglo Plutonomies manage to block access to information goods/services in order to further enrich the financial elite. The system is trying to clamp down on intellectual property & internet access (SOPA) but even if it does, the capital creation fluctuations introduced by newly patented technology will grow to a point where the markets will lose their ability to accurately measure value and capital will become meaningless. If Google can create 200 billion of market cap mainly down to a patented PageRank algorithm, then things are going to get out of control when some real information goods/services start appearing. So this may be the 'last gasp' of the financial elite.


On a tangent to finish off, from the same Citigroup report:

But the balance of power between right (generally pro-plutonomy) and left (generally pro-equality) is on a knife-edge in many countries.... A collapse in wealth in the plutonomies, felt by the masses, and/or prolonged recession could easily raise the prospects of anti-plutonomy policy.

This report came out in 2006 before the GFC.. Oh the irony (Occupy Wall St, we are the 99%)... No wonder Citigroup lawyers fought so hard to suppress this report.
at 15:57
Email ThisBlogThis!Share to TwitterShare to FacebookShare to Pinterest